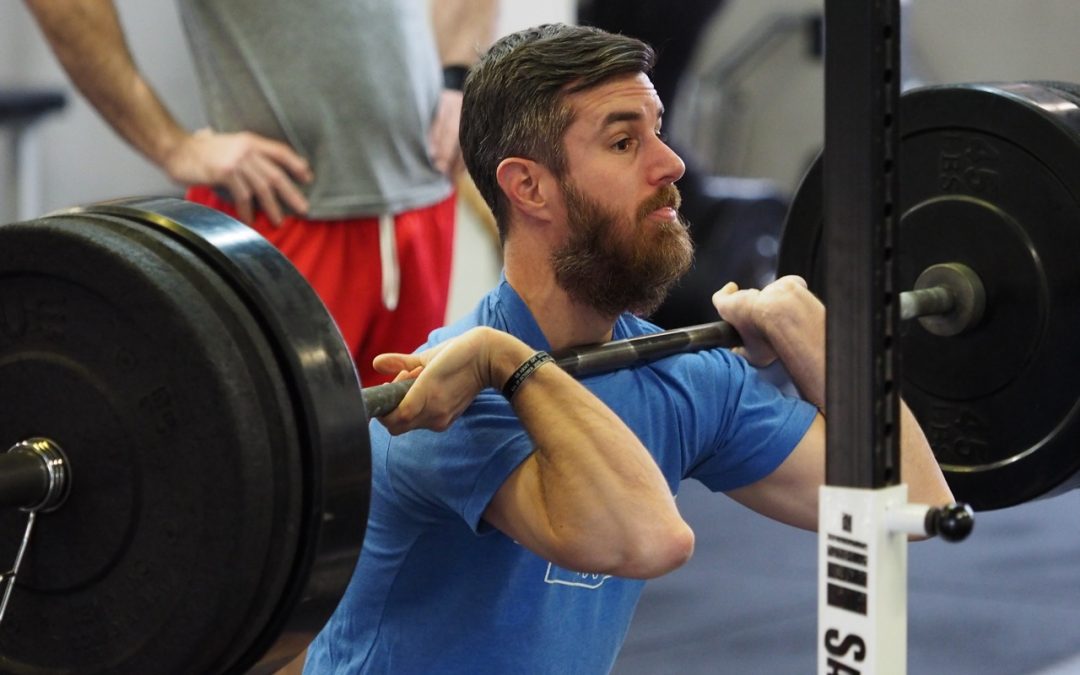 Feats of Fitness 2017 was a gym wide competition for both our group and private coaching community. A friendly, in-house showdown, Feats of Fitness tested various energy systems as well as movement skills, determining a male and female champion. 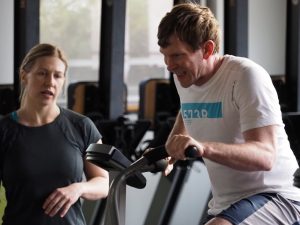 When testing physical fitness is the aim, things unquestionably move away from feelings of “fun” and more towards feelings of “suck”. This is why school age students across the nation bemoan their annual mile run test. Without a doubt it is more fruitful, more fun, and a better use of our time to stay in a season of training versus testing. No one is going to move the needle long term on their best deadlift for five reps by coming into the gym and testing their five rep max deadlift week in and week out. 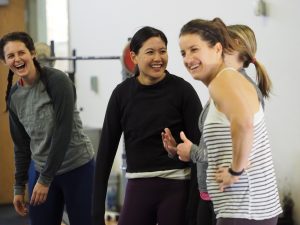 However, a brief and momentary delve into testing physical abilities can be an excellent way to measure where we are at. From time to time it’s purposeful to see if the measurable components of our fitness have improved. Are we objectively stronger? Have we learned new skills? Are we undeniably better at breathing than before? That was the motivation behind Feats of Fitness at MSP as well as having a little fun to boot. 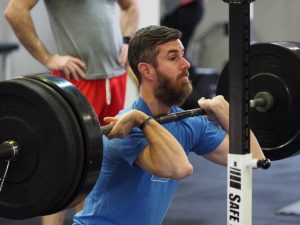 When looking to test strength, the unadulterated choice is generally a single repetition maximum, or 1RM. On the other hand, how do you select a 1RM that allows for adult group fitness clients to succeed on a random Saturday morning at 9am? It’s one thing to gather up the collegiate athletic squad and test max bench press as those men and women aren’t professionals, parents, or even puppy dog owners. Three reps levels the playing field a bit, allowing for folks to be successful despite the myriad of “what ifs” of life, but still be set up for success to express their ability. We selected front squat as the movement because it’s an exercise our population moves really well on, giving us little hesitation in adding intensity to that skill. 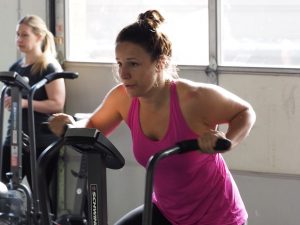 Ahhhh the air dyne, the Devil’s Bicycle. Brutal is one word that comes to mind, and not for the faint of heart. There is no place to hide here. You earn what you put into it. A three minute max effort test on the bike is unquestionable depleting and a great gut check for someone who is willing to push. While you might be able to play some mental games like using legs versus arms, or some trick on the passage of time, these are perception based tips — not strategies directly effecting output. Needless to say, our participants crushed it. We periodically perform this test in our group training, so it was nice to see some athletes improve or hold their own against their previous scores. 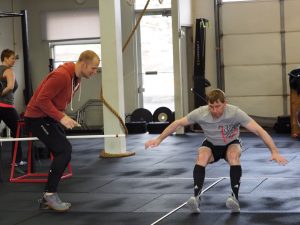 The standing long jump, or broad jump with counter movement, is an excellent test of power. We like it because it is pretty fool proof and carries this playground tone of, “how far can ya jump?” As long as an individual’s hips, knees, and ankle faculties are in good order and their landing mechanics are solid. When compared to another common test of power, max height box jump, I appreciate the fewer variables and dampened risk the long jump provides. We gave participants three attempts and of course, took pictures of them strutting their stuff. 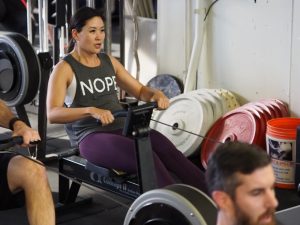 Event 2a and 2b were completed as one event, a 5,000m row. Event 2a, however, was scored separate from the total 5k row. And so, the strategizing began. Do you maximally sprint the 500m, only to be left in the dust on the 5k? Should you game it, but risk dropping points on a crucial event? Fortunately this was just an in-house, friendly competition amongst our gym goers, but these questions were asked and you could see individuals playing to their own personal strengths in their choices. 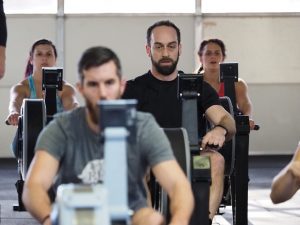 As expected, when we wrote the row distance on the board, unveiling the event, few were ecstatic. That being the case, this was the best event of the whole series. Simple. Single Modality. Repeatable. Weight Adjusted = Level Playing Field, and more. All present took strong starts, paced their middle, reserving enough to finish with a kick.

Event 1: 1RM Turkish Get Up | weight relative | scored as percentage of bodyweight 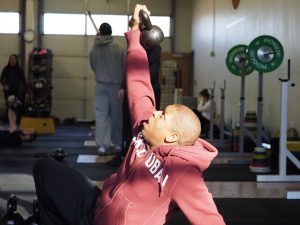 Like the row, it was important for us to score another event with weight relativity. The measure was percentage of bodyweight versus total poundage hoisted. Weight moves weight so they say, meaning it’s theoretically easier for an individual bearing more mass to move more mass. Scoring percentage of bodyweight allowed us to declare a pound for pound victor. The Turkish Get Up is an exercise requiring great skill. Performers must possess requisite mobility, stability, kinesthetic awareness, and reaction skills mid-movement. While we do a good deal of TGU’s in our group and individual programming, it is seldom taken to a single repetition maximum. Our Feats of Fitness competitors crushed it, setting PR’s along the way. In fact, we’re going to have to shop around for some heavier kettlebells!

Event 2: 7min AMRAP | as many reps as possible 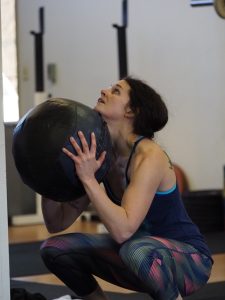 Having one workout that included a mixed movement or mixed modal element was paramount. While popularized by CrossFit™, varied circuit training has been a elemental component of fitness training for decades. There’s nothing quite like juggling fatigue with counting reps, switching exercises, and maintaining movement quality all simultaneously. That being said, it’s a little more complicated than tossing a bunch of exercises at people and saying 3-2-1-GO.

We sought, and always seek, to select movements that people can proficiently in the face of fatigue. While she might slow or look beleaguered, a sprinter’s running form doesn’t break down in the last meters of her race — so too should it be with testing fitness. What worth is a “test” if half the participants have to drop out? Sure, the finishers can high-five and exclaim, “We survived!” but an assessments of physical abilities ought to look more like that junior high mile run I referenced above and less like a Tough Mudder. One is an objective examination of abilities, the other is fitainment (and for the record that is fine… just don’t call it a test).

Back to our seven minute AMRAP (aka As Many Reps As Possible). We programmed the following workout for the final event of Feats of Fitness: 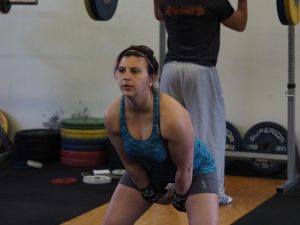 The kettlebell swings, wallballs, and burpees are all exercises our participants routinely perform for both skill and under fatigue, demonstrating those movement’s worthiness for inclusion. As far as reps, fifteen swings, ten wallballs, and five burpees is a range of repetitions that unfortunately means no one will be breaking the performance up mid movement. The duration to perform each exercise was short enough that there was essentially consistent movement for all seven minutes. That reality is what made this one suck a little. Finally, we standardized the weights for the loaded movements and used a two foot jump over the bell to signal rep completion as it is tough to objectively measure when a burpee with no proclaimed end actually finishes. Loved seeing this one come to the bitter end as people were neck-in-neck throughout the seven minutes.

Through and through a great competition for our community. We hope for this event to be an annual staple at MSP. An opportunity to come together, express our fitness, and showcase improvements in abilities. Can’t wait to see what the next Feats of Fitness will hold!

When it comes to finding a coach or training facility, sharing a wellness worldview is crucial. Maybe you’re attending oversized group classes with little direction. Or possibly you’ve got a personal training helping you with your program, but somethings just not working. Maybe you’re just in a rut? Whatever it is, MSP Fitness has the solution for you!

Our facility located in St. Louis Park, Minnesota is all about giving you options to pursue fitness and smash your goals, setting new ones along the way! We’ve been serving the West Metro, South Minneapolis, and larger Twin Cities community since 2009, offering private, semi-private, and group training options.