Inspiring Story of Trust and Dedication Towards Reaching a Goal 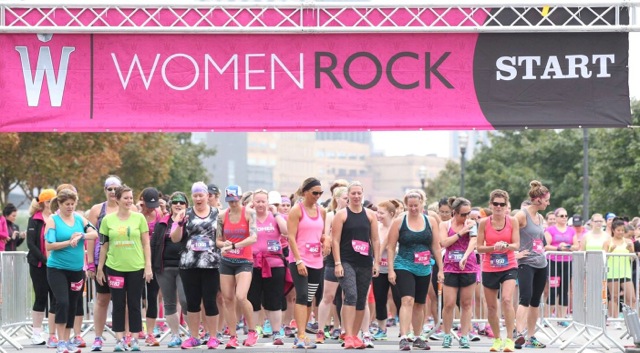 Today’s guest post is from Tina, an Exclusive Coaching client. She is one of those clients that are a treat to coach. Not only does she value learning and doing things right, she is an incredibly hard worker, following the training plan to the letter. I am so proud of her and all that she’s accomplished in such a short time. This is her story about her recent 10k race we trained for…take it away Tina!

I have lived a few blocks from MSP Fitness for almost five years. I was one of those people on the trail, looking in, wondering, “What are they doing in there?” That finally changed this past May. 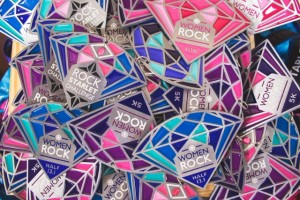 I had been going to the YMCA for the last few years, but I was in a rut. I would walk on the treadmill for 20-30 minutes, and then call it a day. In the past, races and vacations have been good motivators, so I signed up for the Women Rock 10K to give myself something to work towards. There are a plethora of 10K training schedules out there, but I felt like I needed something more. I wanted to be stronger and do more focused conditioning to supplement the running. After looking at the MSP Fitness website over Memorial Day weekend, I finally sent that first email requesting a consultation. My thinking at the time was that I could incorporate a couple of generic group classes each week to go along with my running.

I first met with Michael on May 28th, and we began by talking about my history related to health and fitness, and what my goals were. I said that my first goal was to train for and complete the Women Rock 10K on August 28th. I wanted to run the entire race and feel great doing it – I wasn’t looking to run it in a specific time or break any records. I initially said that I thought doing a group class a couple of times a week with elements of strength and conditioning would be beneficial to the running I would be doing. However, as our conversation evolved, Michael mentioned that his Exclusive Coaching program would be a better option for me to reach my goals. Exclusive Coaching appealed to me because it would include not only the in the gym strength training sessions, but also the 10k running preparation I would be doing off site. It would be specifically tailored to my goals, and also incorporate Michael’s philosophy on training with a focus on long-term health and fitness.

To assess where I was at, I ran Lake Calhoun (3.1 miles) a couple of days later as a ‘base run.’ My total time for this run was 45:21 and an overall pace of 14:35. I had to walk for a few minutes after the first two miles because my legs felt like lead, and my breathing was really heavy. Then, I had my first training session at MSP Fitness that following Monday. 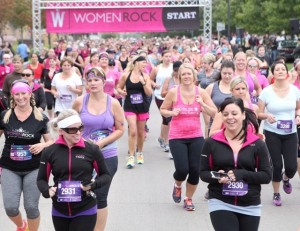 For 12 weeks, I had seven scheduled workouts each week, including one day with two workouts (running in the a.m. and a strength training session in the p.m.). The schedule included three running sessions, three sessions at MSP Fitness, and one active recovery session on the weekend. At first I wondered how I would fit it all in and if I would be able to do all of this, but I made the commitment to myself and put my trust in Michael that this was the best path to achieving my goal. There were certainly times I did not want to get up at 5:15am to run, or a few nights where I did my training session off-site because work was hectic and I could not make it to MSP Fitness in time to get my workout in, but I knew that with each session I was getting stronger, both physically and mentally.

I followed the plan Michael sent me each week to a T, never missing a run or a training session. The plan was only going to work if I followed it, and that was evident when I re-ran Lake Calhoun six weeks after starting the program. Those 3.1 miles were one of the best runs I have ever had! These were my notes I sent to Michael after the run:

What a difference 6 weeks makes – felt great during this run this morning!
Felt really consistent with my pace and just enjoyed the run.
Pace a bit slower the last half-mile, but felt like I could have kept going.
Just under a 13:00 minute pace overall and total time of 40 minutes. 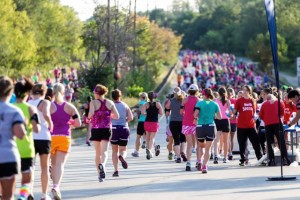 Over the next several weeks, I had good runs and bad runs. However, with each run I was learning to control my pace and run within my abilities based on feeling, versus being tied to whatever number the Runkeeper app or Garmin watch was logging.

Finally, it was the end of August and race day was finally here! The weather completely cooperated, and it was a brisk 58 degrees at the start of the race. I was off and running at 8:10am with over 2,000 other women. My pace the first mile was a little faster than normal, but I was able to level things out and go based on how I was feeling from there on out. At one point in the race, a woman that I did not know ran up next to me and said “you’ve looked so good this entire race – very strong and running the whole time.” Wow, I was not expecting that, and I will never forget it! 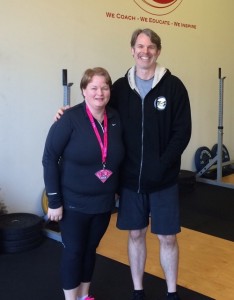 I crossed the finish line in a total time of 1:26:31 and an overall pace of 13:55, which was 25-30 seconds per mile faster than what I had logged during the my long runs the past several weekends. To be honest, I don’t really care what the time was because I had met my goal of running the entire race and felt great doing it!! All of those early morning runs and after-work training sessions had paid off. I had never prepared like this for a race before, and I could not have done it without Michael’s specifically tailored training program, ongoing support, and words of encouragement.

Results like Tina’s come with REAL TRAINING and intentional coaching. Stop thinking about what could be and start actualizing your health and fitness goals!