My Reflections from the 2015 USA Weightlifting National Championships 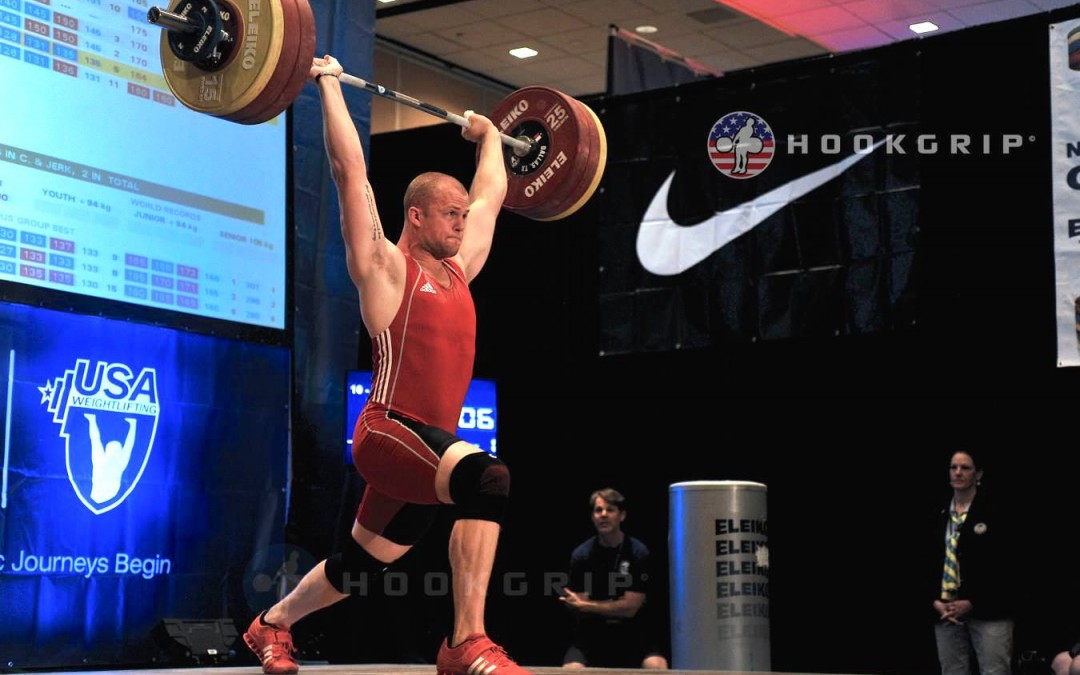 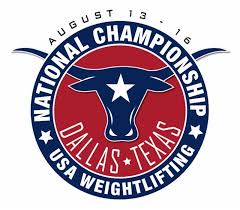 As I’ve sought to recap my experiences at the 2015 USA Weightlifting National Championships, I quickly realized that this journey started far longer than a few months ago. I have been competitive in the sport of Weightlifting for the past two and a half years. Prior to that, I was a collegiate and scholastic track and field athlete, competing predominately in the discus and hammer throw. Even further back yet, I can remember touching a barbell for the first time at the age of sixteen (admittedly to bench press, but a barbell nonetheless). Because of my near decade long tenure in training for strength sports, I’ve been fortunate to have a shorter transition into competitive weightlifting than most individuals.

I can remember last year when my coach Michael Pilhofer and I sat down and charted out a path towards my goal of reaching a national level meet. Up until then, my aspirations seemed far off. Despite having the drive and a relatively well-versed background, I had my fair share of mobility and technical limitations. I can still remember the day, after months of training, that Michael told me my overhead squat was finally looking respectable and worthy of introducing full snatches. Needless to say, I’ve been working towards this moment for some time. 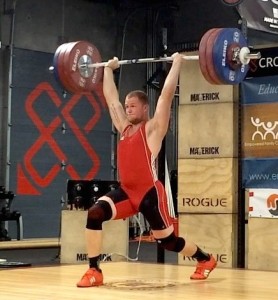 I have always thrived in competitive environments, particularly in individual endeavors. From being the only one in the throwing ring, to a weightlifting stage with expecting eyes watching every move, I have felt comfortable in the role of entertaining through competition. It was in such a competition that I qualified for USAW Nationals. Last October of 2014 my Snatch (the first movement of the competition) and my Clean and Jerk (the second and final movement) combined for a personal best total of three hundred kilograms, earning me a place in the championship meet this past week in Dallas Texas.

To date, all of my previous weightlifting nationals have been viewed through the lens of live streams or various social media outlets, taking the role of a sporting fan. For my first nationals meet it just so happened that the USAW (United States of America Weightlifting) made a few changes from the previous years’ set ups with the unveiling of three competition stages — in lieu of two last year and a single stage the years prior. This set up provided our Nation’s best “A” session lifters a center stage with a singular viewing option. The remaining “B”, “C”, and “D” sessions shared all three stages in unison. Personally coming out of the 105 “B” session, I had worried about noise distractions from other stages, warm up room space, and timing errors. However I must say, both Michael and my experience was nothing but a smooth one.

The National Championship was one of the larger weightlifting meets the USAW has held with more than 420 athletes. This number doesn’t account for the coaches, family, spectators, referees, judges, and administrative personnel that accompany a meet of that size. Struck by the scope, I was also in awe of the people. Every person I’ve ever spent hours watching through YouTube, creeping on Instagram, or admiring via his or her coaching prowess, was present. On the first day, after receiving my credentials, I went to check my weight. Standing outside the room was none other than legendary coach John Coffee. I look to my right and see Nat Arem of “Hookgrip” fame. I proceed to a meeting room and around the corner are Greg and Aimee Everett along with parts of Team Catalyst walking through the lobby. All in all, my weekend was filled with sightings of celebrities from this super tight-knit community we call American Weightlifting.

The competition effectively started on Friday, yet my session of lifters wasn’t scheduled until Sunday morning, the last day of competition. While this could be viewed as a disadvantage, I thoroughly enjoyed the prospect of taking our time traveling and being able to get in a day of tune up training. Having settled in, my duty as an athlete was rest above all else. Trust me, I wanted to walk the city of Dallas, find a hole in the wall barbeque joint, and enjoying the would-be pleasures of a traveler on a long weekend. The reality was I had worked hard to get there. I had sacrificed time and energy in preparation. All in all, I was more than willing to forgo some small pleasures for the satisfying reward that is achieving a personal best in the competition ahead of me. 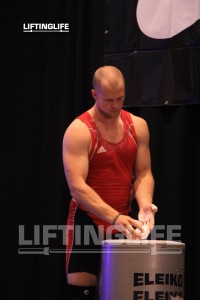 I woke up the morning of the competition more than ready to go. With a session that commenced at 8:30am sharp, I was up and at it around 5:30am, ensuring my arrival and giving me more than enough time to weigh in and warm up. In the sport of Weightlifting, athletes are categorized by weight class and must “weigh-in” two hours prior to competing. This can be somewhat stressful for individuals who must cut or lose mass in order to “make weight.” Fortunately, I am pretty consistent in mass and typically do not experience the stress surrounding weigh-ins.

Michael and I had already discussed my openers (first attempts) in the weeks leading up to Nationals. For a few days now, I had been visualizing the exact weight being lifted, what plates where on the bar, seeing myself finish each rep successfully. Things started to become more surreal as we walked into the warm up area. I wasn’t in the most talented session, but it seemed like the room was filled with recognizable faces from every corner of Weightliftingdom. Ursula Garza stood counting attempts for members of Texas Barbell. Donny Shankle was warming up to lift in my session, and Glenn Pendlay observed an athlete alongside Travis Mash in the session next to mine. I could feel the potential distractions looming, so I quieted my mind and focused on going to work.

Warm ups felt great. Each addition of weight was exactly what I expected it to be. A second wave of surrealism sunk in as the lifters in my session were announced to the crowd. I went back to the warm up bar and progressed towards my opening snatch (the first of the two contested movements). I ended up missing my last warm up at 124kg. This happens time to time, and in that moment I was especially thankful that this was not the first meet I’d done that at. Needless to say, I made my opening snatch at 128kg… Whew. 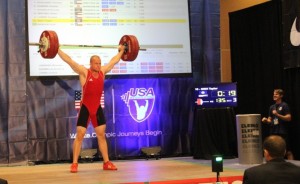 Our typical strategy at meets is for Michael to “steer the ship” so to say, choosing what weights will go on the bar next, based off what he sees. Sometimes, I don’t even know what’s out there, simply that I am expected to make it. In the case of my snatches, Michael progressed the bar to 131kg, a would-be competition PR (personal record) snatch by one kilogram. After successfully lifting 131, Michael made the final call, advancing my bar to 135kg, a would-be lifetime PR. Now in this instance, I peeked at the screen to see what he had put down as my final attempt. I was feeling good after 131, and after all, we didn’t come to settle. Walking out on the stage, I already felt like the lift was mine. In weightlifting, there is a weird, intangible, “I respect you, but I own you” mentality a lifter has to have with the barbell. 135kg felt great. Snatches were done. I went 3/3 in the first movement of my premier national meet. 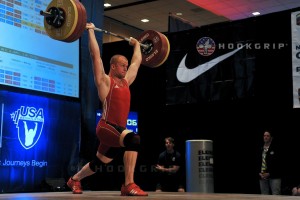 Onward to the second and final contested movement: the Clean and Jerk. In a weightlifting meet, after the final competitor snatches, a ten minute clock is set to separate the two activities. Similar to my Snatch warm ups, Clean and Jerks felt like a breeze. Michael was giving me important but concise cues like, “keep the chest up” and “whole foot.” Nothing new or entirely complex enters the conversation in these final moments. My opening attempt in the Clean and Jerks felt great at 164kg, the highest I have ever opened at in a competition. As we moved up to 169kg, I felt confident but alas, lost the lift, failing to fully rack the bar in the bottom of my squat.

Knowing that I need a little bit of rest, and that I was capable of more weight, Michael and I decided to increase the bar to 170kg. The sport allows athletes to move up in weight no more than two times before the next attempt. This means that a coach and athlete can buy time by playing games with the next attempt’s weight choice. Walking out onto the stage for 170kg was just like any other lift, I wanted to succeed and make it an undeniable three white light lift. Ultimately, Weightlifting is a subjective sport left to the decision of three judges. Their call is a simple one: red lights for a no-lift and white lights for a good attempt. Even though my final Clean and Jerk was successfully put overhead, I failed to keep the requisite elbow and shoulder straightness required to please all three officials. 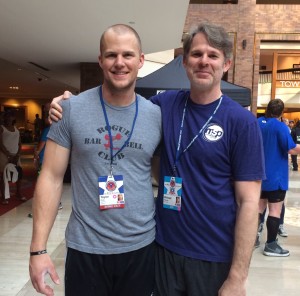 As I’ve reflected on how the entire experience unfolded, I can’t help but have feelings of joy in regards to the entire weekend, while still feeling unsatisfied with my final two clean and jerks. For me, with a lifetime of competing in individual sports, I’ve come understand that competition breeds in me a sense of clarity. I now possess a direct, uncluttered vantage point on what my goals are for the future. It’s time to get back to work, whittle away at my shortcomings, and continue to progress.

This barbell journey has certainly been a long time coming and I have many individuals to recognize and thank. First and foremost, my amazing wife Ally has been ever supportive and patient. She’s watched meets for hours, waiting for the mere ten seconds where she actually knows the person on the barbell. And in the midst of all my training, she has co-championed this spectacular life event we call parenting with more grace than I knew existed, thank you babe.

In addition to Ally, I am very appreciative of my family; my mother, father, and sister played a big role down in Dallas. They were instrumental in guaranteeing our five month old was as calm, cool, and collected as any five month old can be. Also, how could I leave out the great community over at MSP Fitness! They’ve come to competitions with signs, made Internet memes, and awaken extra early to watch the live stream of my national debut. Thanks to all of you for your unwavering support.

Lastly, I would not have accomplished such a task without the direction, guidance, and motivation from my coach, Michael Pilhofer. Week in and week out I enjoy the luxury of showing up for my workouts, competing at meets, and even attending the national championships without a worry as to what the plan is. Michael handles all the details and coaches me as an athlete so that I can solely focus on executing, a relationship I will never undervalue.

For all of your own curiosity and potential enjoyment, I thought I’d include some video links to other stellar performances. The 2015 USA Weightlifting National Championships in Dallas Texas certainly were one for the books. Highlights include: 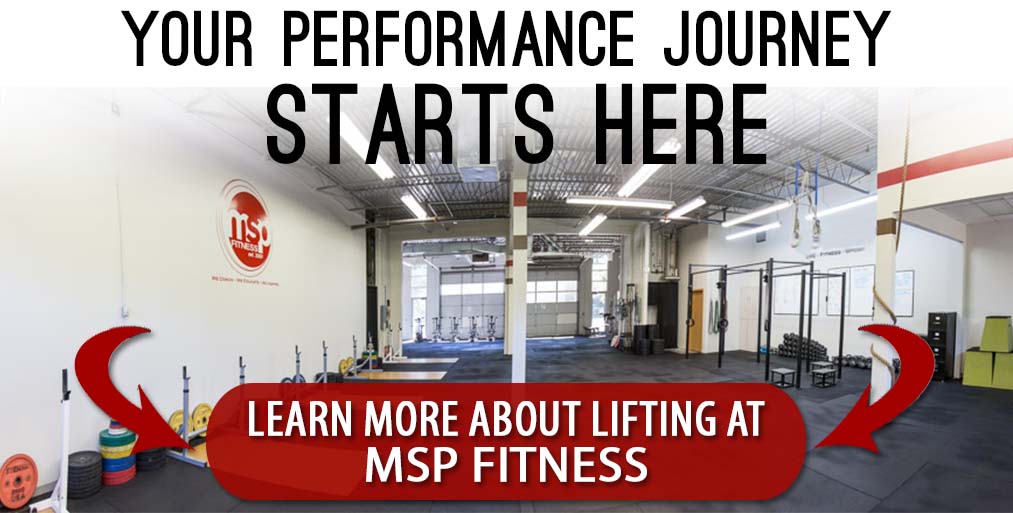